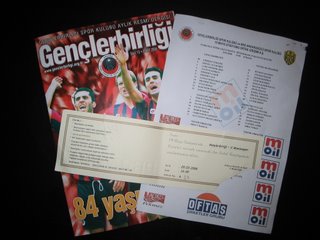 A great day in Ankara Saturday with Genclerbirligi coming from behind to beat Vestel Manisaspor 2-1.

Viking Kanka Jens, Finlania Kanka Marcus and myself met up as usual (even though Viking Kanka's military background failed him as he was yet again late - today he used the excuse of having left his ID card at home) and went off to the Chopin Pub in Kizilay where we have become such match day regulars that the waiters now shake our hands.

A couple of beers in and a fellow who thinks he can play darts called Emin gave me a call asking if we wanted to join him at the match. The answer was "of course".

We finished up the beers and headed down to the stadium and arrived about 45 minutes before kick-off, plenty of time considering Genclerbirligi don't exactly generate the biggest of crowds. I rang Emin back to ask him where he was and he said he would be leaving for the stadium and wouldn't be there for another 30 minutes.

While I didn't tell him, I did think this would be cutting the whole thing a bit fine. My other thought was that we should have stayed at Chopin and had another beer. But with time to kill I suggested we check out our old hang-out, the Sahil Pub in Genclik Park. Certainly no opposition to this idea from Viking Kanka or Finlandia Kanka so we trecked across the road to find a scene something out of downtown Baghdad.

Of course, the water was drained out of the "lake" ages ago but the municipality seemed to have taken great delight in smashing everything that used to sell alcohol down. The place next to Sahil was in ruins as were a quite a few other places. Sahil appeared untouched but regrettably was not open. So we sadly trudged to what seemed like the only place open and had a cup of tea.

Emin phoned back about 15 minutes to kick-off and we met up with his friend who let us in for free to the protocol section. Compared to gecekondu where we usually watch the matches this was like entering a king's palace. No police searches, lighters and batteries from cameras allowed in no worries, no queueing, clean toilets, and, most importantly nice plush seats right on the halfway line.

There was also the monthly Genclerbirligi magazine on every seat and an actual match day programme, something I'd never seen before.

And so finally, looking over at the boys in gecekondu and feeling absolutely no jealousy at all, it was on to the match.

Genclerbirligi in the first half weren't all that good but I think they had a slight edge over Manisaspor, coached by former Gencler and Turkey manager Ersun Yanal, we had a few chances, one quite funny one when I think it was Ugur Boral sent a floating ball in from the left which the Manisa keeper buggered up. He went up to punch the ball clear but only managed to hit it against his own post. In the follow up Tayfun Korkut couldn't control it and the ball went out.

Disaster struck on 35 minutes though when former Ankaragucu player Yilmaz Ozlem struck a free kick that seem to go through everybody and ended up in the back of the net.

As I was waiting in the no pushing queue at the toilets, I noticed a tall man who looked quite Germanic. Could this be the famous Genclerbirligi fanatic Jorg who I had only communicated to by e-mail but had never met. I asked him, and yes it was.

During the half-time break Jorg said he thought that I always sat in Gecekondu and I have to admit that I felt a little bit guilty about betraying my working class roots.

All that guilt dissapeared pretty quickly as I sat myself back down in my comfortable seat a few rows up from Gencler chairman Ilhan Cavcav.

Second half. Well it didn't seem to great at first, but, the second half of the second half and Genclerbirligi finally came alive. While there weren't many shots on goal there definately seemed like a sense of much needed urgency had finally been found.

On about 58 minutes we should have been given a penalty for handball but the ref dismissed it. (By the way someone put the words "hande bolle" into google and somehow managed to be sent to this blog - I wonder what the Spanish speaker thought when he found that the only hande here was French Kanka Hande).

Two minutes later though the ref did give us the penalty, their keeper came out and almost took off Baki Lentil's head. Ugur Boral took it calmly. 1-1.

I didn't notice the build-up to the second goal but Mehmet Cakir was one-on-one with the keeper and didn't miss. 2-1

A tense last few minutes as Manisaspor threw everything at us but in the end we hung on.

A great result, thanks Genclerbirligi, and thanks Emin.

I'll update on positions once the other matches have been played.

Update: Sunday night. The results of the weekend matches are in, and they are good. Besiktas of course lost on Friday night and so did Trabzon today (Sunday). Third-placed Kayseri could only manage a draw . So that leaves Gencler in fifth, one behind Besikats and only three behind Kayseri. All we need to do now is to overhaul those two in front of us and we have some serious Euro football on our hands. Fingers crossed.
By Oz Kanka - March 25, 2006