On top down there 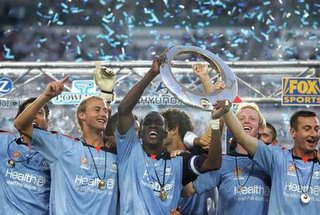 The Turkish Super League (I'm not going to name it after the company who has the naming rights until they offer this blog a big load of cash, or perhaps a lot of free phone credits to Australia) is at a very tense stage what with Galatasaray back on top and the fight for the UEFA Cup place hotting up.

But I've decided to ignore Turkey for a bit and focus on Australia. In particular the football grand final between Sydney FC and the Central Coast Mariners.

Aussie football, and nowadays it is called football, not soccer, has been revamped in the last year or so. This is the first year of a completely new competition organised to try and rid the game of the ethnic rivalry (perhaps that should read ethnic hatred) that has plagued Aussie football for years.

When most people think of Australian sports they think of games such as cricket, rugby, rubgy league or that aerial ping pong rubbish known as Aussie Rules. Little is it known that football, the old soccer, has more registered players than the rest combined.

Your good correspondent even played the game on a semi-professional level in the under eights division of his local league (I was playing for a team comprised of kiddies from two local Catholic primary schools and so naturally our team was called Saints United. As for being semi-professional, the coach used to buy us a milkshake after the game, win, lose or draw).

The problem was there was no professional team in the region of Sydney for me, an eight year-old kiddie of English-Irish background who was not really all that clued up on the background of why the Croats hated the Serbs.

We had teams such as Sydney Olympic (for our cousins across the Aegean), Apia Leichardt, for our cousins from across the Adriatic from Olympic and various other teams but who was I to support. Well the answer was clear, my local rugby league team, Balmain.

To cut a bloody long story short (and this is getting much too bloody long anyway), a whole new non-ethnic league was set up last year and surprise, surprise, the crowds have shown up. Sydney has just one team, Sydney FC, and everyone in Sydney, the Turks, the Greeks, the Serbs, the Croats and even the Scots, have joined together.

Now onto the grand final that was played today.

Oh, one last background point. The winner of the league in Australia isn't based on the final standings. The top four go into a finals situation. ie 3 plays 4 (with the loser bowing out), 1 plays 2, with the loser playing the winner of 3v4 etc etc. In the end we had 4th placed Central Coast Mariners up against 2nd placed Sydney FC with the final played in Sydney.

If you have got this far into the post you are now going to be rewarded with some choice quotes from the Sydney Morning Herald's review of the match.

Take another look at the photo (my lawyer would like me to attribute this to the SMH, photographer: Craig Golding).

It was (former Manchester United player Dwight) Yorke, the captain (of Sydney FC), who raised the silver trophy, which when held aloft is a halo of beauty, but resembles a toilet seat when laid flat.

I'm not even sure what the (your company's name could be here) Turkish super league trophy looks like. But on with the SMH.

The final had been billed - even by the football chief John O'Neill, who recognises a classy promotional cliche when he sees one - as glitz versus guts, millionaires versus minnows, latte-sipping city slickers versus lager-slurping country cousins.
Of course, whatever the result, the winner, according to O'Neill, was always going to be - you guessed it - football. New-fangled football. Soccer as was. For this was the day - fittingly on the weekend Sydney hosted the Gay and Lesbian Mardi Gras - when football, world football, a code once thought suitable only for "sheilas, wogs and poofters", finally came out.

I can finally tell my Aussie mates, "I love football!" That is unless there is a rugby league match on the telly, but not much chance of that here in Ankara.

I almost forgot to tell you the score, Sydney won it 1-0 in what was described as "full of honest endeavour but short of real drama".