Warm and fuzzy in Ankara 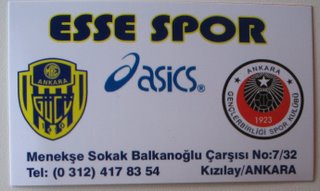 A wonderful spring day in Ankara on Saturday and the Kankas came out of the woodwork for a beer or three before the big match.

All up I reckon we doubled the daily profits for the Chopin Bar with the roll call reading Eski Kanka Jim (for whom this was his first live football match this year), a rare appearance from Genc Kanka Eddie, Lanky Kanka Jorg made his first visit to the Chopin, Jorg's mate Rasit, No Name Kanka Gokhan, Kilkcardy Kanka Martyn and Mrs Kilkcardy Sinead (whom I accidently demoted to girlfriend status at one stage) and Canadian Eh Kanka Richard.

Who knows quite what the normal patrons thought of a bunch of foreigners talking about football and, in the case of the Kilkardy Kankas and Canadian Eh Kanka dressed in the latest Ankaragucu gear.

But it was all very civilised and a testament to the powers of the internet considering that a week ago we hadn't even known of each others existance. Now thanks to Ankaragucu we are all the best of friends.

It was then off to the match (where Marash Kanka joined us) but that is a story for Eski Kanka to write about. Let me just state that it was probably the best match I've seen in Ankara this year (typical that the one match Viking Kanka Jens decided to miss was such a good one). I guess stating that the score was 2-3 with Besiktas running out winners won't spoil Eski Kanka's story too much.

My job today is to write the sad story of Genclerbirligi's 3-0 loss away to Galatasaray. As you are all too clearly aware of from this particular post, and the blog in general, the vast majority of writing is actually about the "circumstances" rather than the "facts".

So more circumstances: Depressed at the loss we decamped to the Knight and Flight for the extremely late kick-off of the G v G match. By this stage we had shed a few Kankas but had also managed to pick up Maniac Kanka Harun who scared the rest of the K and F crowd by starting up various Ankaragucu chants. The business card pictured above is Maniac Kanka's. He sells all sorts of Ankaracucu and Genclerbirligi gear, shirts, scarves and even boxer shorts.

Advertising and circumstances over and time for the match. Genclerbirligi came out strong but the referee effectively put us out in the eighth minute when Risp was adjudged to have pulled down Hakan Sukur in the box. Bollocks to that. Even Gulay on her blog said Galatasaray where "extremely fortunate". She also manages to get a dig in at Nobre from Fenerbahce at the same time, smart girl that Gulay.

Necati Ates slotted then the ball in. 1-0.

21 minutes in and the referee ensured that he can afford to send his kids to be be taught at Bilkent by awarding another penalty. This time the ball came off Sukur and Ismail Gulderen hit the ball with his elbow in order to protect his nose. Necati Ates converted and effectively the match was over. 2-0.

Genclerbirligi continued to attack however, and we had numerous chances but Galatasaray keeper Mondrogon had a great match.

One of those chances was when we actually got the ball into net but the referee decided that the ball had already gone out. Looking at the replays would suggest that Galatasaray were extremely fortunate once again.

Ahh, almost forgot the incident that ensured the banks loans for the holiday house in Antalya need not worry the referee anymore. Just before half time Isaac Promise made one of his rare good moves when he got around Hasan Sas and was just outside the box before falling over. Rugby commentators would no doubt describe the incident as a "try saving tap by Hasan Sas who just managed to grab Promise's ankle". This was clear red card stuff but the ref only gave a yellow.

I have to admit though the third Galatasaray goal was bloody good. Hasan Sas sent a brilliant ball through to Adrian Ilic who then whacked it passed Gokhan.

Oh yes, we also got a penalty at some stage which Mondrogon saved.

Oh dear oh dear. Hurriyet newspaper today failed to give any of our players more than 5 out of 10. I think that was harsh. We had 27 shots (admittedly only seven were actually on goal) compared to Galatasaray's seven. Even when we were 3-0 down the team kept going, seeking at least a compensation goal, right until the final whistle.

So then, two bad results for the day but I prefer to think that the winner was football, in the warm and fuzzy way that it brings Kankas together. The Efes also helped.

UPDATE: (Sunday night). Well at least something went right this weekend with Kayseri losing to Konya. Still, Gencler go down to fifth place, one behind Kayseri and two behind Besiktas who are in third place and that Euro place. Next week we are up against Trabzonsor at home. More details soon.
By Oz Kanka - April 02, 2006