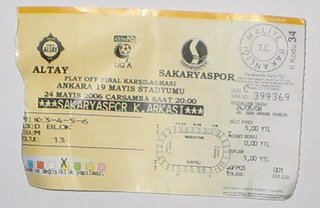 There is something great about watching matches in which you don't really care who the winner is... you end up enjoying the football.

It was a small Kanka crowd for tonight's play-off match between Sakaryaspor and Altay to see who would be the last team to be promoted to the top flight, just Sir Eski Kanka and myself made it.

Sitting in Chopin and enjoying a beer it did make me wonder why don't we make football a summer sport.

The waiters at the bar obviously know us by now and paid out on Ankaragucu (they clearly haven't figured out my allegiances). A few Efes' in the delightful warmth that is spring in Ankara and then off to the stadium.

Knowing just how important this match was the police weren't taking any precautions. In addition to the body search they even checked inside my newspaper to make sure I hadn't hidden a rechargeable battery. I'd say there were about twice as many cops as is usual for a match in Ankara (and that means a bloody lot of cops).

I'm not going to say much about the match, except that it was brilliant.

Sakaryaspor started out strongly but Altay soon seemed to be in control. Jim disagreed with me but I reckon Sakarya were damn lucky to go ahead when ex-Gencler man M'Bayo scored for Sakarya in the 16th minute.

It was at this stage that the Sakarya fans went mad, singing and yelling and letting off flares (a fact that disproves my earlier statement that the police were extra thorough tonight).

Back to the match and it was a ding dong affair. Neither side had a very good defence and strikers were being left unmarked all the time.

Altay could possibly have scored three goals before they finally got one in. No names in this report as I don't have a clue who the players were but their goal went something like: player from an angle whacks it at goal.... ball bounces off side post... falls to bald-looking player who hits it from an angle... goalkeeper parries... shananigans about two metres out and finally the ball ends up in the net.

It was great stuff. The goalkeeper then went off to complain to the ref, Selcuk Derili, (who by the way not only had a very good game... rare that you will ever hear me say that... but is also a friend of Sir Eski Kanka... even rarer), but Dereli would have nothing of it and instead gave the Sakarya goalkeeper a yellow card for being a whinger.

1-1 and the Altay fans were waving balloons. Never seen that at a Turkish football match before.
Before long however, Sakaryaspor were back. Not sure who scored but it was a great shot, against the run of play.

Between this goal and half-time we had a number of shots on goal and some damn fine saves, by both goalkeepers, and Eski Kanka and myself had a nice little discussion about the stupid rule (make that law) that gives goalkeepers so much bloody protection.

A great match it was but then the No. 3 for Altay proved to me just how bad the cheating is in Turkey.

The bloke went down after being slightly nudged. The ref did not give a foul, thank God, but our man stayed on the floor writing in agony as if he had been shot for at least two minutes. He was eventually stretched off only to come back on a minute later. Needless to say, his injury was so bad that he ended up playing the rest of the match.

Second half and the Sakarya procession started.

Few details from now on but let me say that Marcel M'Bayo had a stand out game. M'bayo was a true whippet tonight. Every time he got the ball it looked like something was going to happen. He didn't score again but bloody hell did he look good.

M'Bayo's performance reminded Sir Eski Kanka of the time when he and Youla for Genclerbirligi had ripped apart Ankaragucu 5-0 (at half-time).... Ahhh, how I wished I had seen that one.

But back to the match, Sakaryaspor No. 9 scored twice (both very nice goals) and the game was out of reach. 4-1 with 23 minutes left.

The final whistle blew and the stands erupted with joy. The players came around throwing shirts into the crowd and even I, a neutral at this game, had to feel happy at the great acheivement Sakarya had made.

Of course the police then buggered up whatever good feelings we had by refusing to let us out of the stadium for 25 minutes.

So Sakaryaspor into the Super Lig next season. Well done.

It was then off to the Knight and Flight for another beer and to watch game of darts, but that story is for another blog.
By Oz Kanka - May 25, 2006