Beer, food, great people and some football (I think) 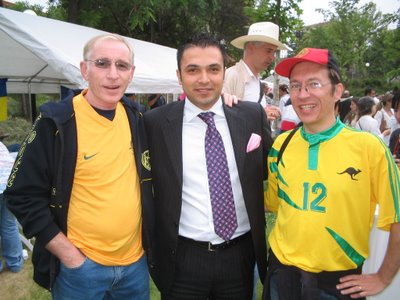 I've been waiting for ages for this World Cup to start and in the end I hardly saw any of the matches on last night. Perhaps that had something to do with the lashings of amber fluid that the German Embassy were so kind to lay on at a private function for the Kankas, or perhaps it was all the great people. I prefer to think it was the former.

Lanky Kanka Jorg informed us a few weeks ago that the embassy was putting on a small do and asked us if we would like to invite a friend or two. Some 20 friends later the invite list was closed and us lucky enough to get our names down at the embassy gate were in for a great start to the tournament.

First up, the food. Well actually I guess the beer was first but then it was on to the food.

Chicken and lamb shish kebabs were expected, and delicious, but I was very happy to see that various World Cup participating countries had their own stalls which meant I enjoyed some lovely salmon from the Swedes, sushi from the Japanese and I think I spent quite a lot of time sampling the pork products from the French stall.

As can be seen from the photo above and the photos I've put on "flickr", this was a "football shirt party". In some of the photos in that collection you can see Match Virgin Kanka Suzan wearing her favourite Gencler top, my cheap rip-off of an Aussie shirt, Carlo in his orange of Holland, Berrak had Besiktas!!!????, Cem had his Turkey (brought to you by Coca Cola), Smart Arse Yankee Kanka Dave wearing a smart arse yankee shirt and No Name Kanka wearing a German shirt!!!???

Sir Eski Kanka showed up wearing his Ankaragucu gear but was saved when, fresh from her business trip to Australia, Mrs. Smart Yankee Kanka Suzan showed up with an authentic Aussie top. I must also thank Mrs. Smart Arse Yankee Kanka for the great little bear dressed in the Aussie colours. I'll give it to little Oz Kanka as soon as I remember what his name is (ie probably not until after the World Cup).

Food, beer, stupid shirts and great people. And who better to strike up a conversation with than the various football personalities who decided to crash the party. Gulay no doubt has fond memories of "Bay Gol" Tanju Colak who seems to have put on a few pounds since his goal scoring days with Galatasaray, former Ankaragucu and Genclerbirligi coach Ersan Yanal was in fine form, as was Atilla Aytek, whom I didn't get to give my advice on how to stack elections. Damn.

We also met a fellow called Hasan Cetinkaya (pictured above) who claimed to know a certain Zagreb Kanka. Cetinkaya is the general manager at Genclerbirligi and seemed to be a thoroughly decent chap whose English was definately more understandable than Sir Eski Kanka's Scottish drawl (that may have had something to do with the fact we pinned Hasan down before he had got to the beer taps).

The football? No idea really if the Germans played well in their 4-2 victory over Costa Rica. I saw a few of the goals and in general I'd say that Germany played well but as I hardly saw any of the match itself I can't really comment. The Germans at the party seemed pretty happy but were still not confident of going all the way this year.

A few of us retired to Libby's place for more beer and the Equador-Poland match. I actually watched quite a lot of this match but as my brain was by this stage swimming around I can't actually recall very much at all. All I seem to remember was that Poland were crap and Equador pretty good. I just checked the BBC website which says Equador won the match 2-0, so basically my recollections are correct.

Thats your lot for now as I'm off to the British Embassy for the England-Paraguay match. More drunken reflections tomorrow. Possibly.