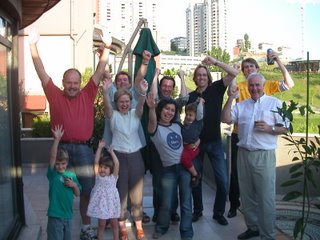 Amazing what a difference 10 minutes makes. I'm used to seeing inept displays but my God Australia really tested me today. There was a wonderful cut on the television coverage to a couple of Australian fans about half way through the second half. The two blokes looked just slightly depressed. We were depressed in Ankara as well with Australia 1-0 down and looking like we didn't have a clue.

Today's match was truely a disaster (well... except the result obviously). We were all over the Japanese but at no time did we look confident in front of goal. What happened to the spirit that kicked Holland off the pitch last week?

Japan's goal was a damn lucky one. Our keeper buggered up badly but still I reckon a foul should have been called. Afterall, just a minute before hand the ref gave a foul to Japan for something less.

But blaming the ref wouldn't be totally correct. We had the vast majority of possession but we didn't seem to have any passion. There was no speed and pressure. We just didn't look like we really wanted it.

All that of course changed in the end. Substitute Tim Cahill scored twice and then another substitute Aloisi scored deep into extra time.

We were watching the match at Aussie Jenny and Pommy Jason's house and we erupted with the result.

Some of you who are reading this may not understand the true passion on display (from us fans at least). We haven't been in any meaningful competition since 1974. Today was the first time we were able to stand up and truely celebrate.

We were crap, Japan was even worse, but by God am I happy at the moment.

Anyway, I'm posting this from Pommy Jason and Aussie Jenny's place as I couldn't wait to get something down for the blog.

Photocaption: The Aussies, and a couple of ring-ins, celebrate a famous victory
By Oz Kanka - June 12, 2006