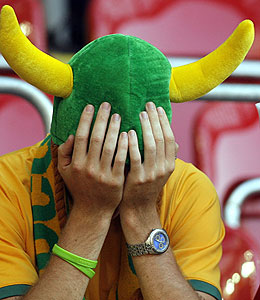 Still feeling terrible today after what could at best be described as a "debateable" penalty sent us out but I guess there are some good points.

It was Australia's first World Cup for 32 years and I think the rest of the world was surprised at how we played and our never say die attitude. We only just lost to Brazil and came back well against Japan and Croatia.

Getting Guus Hiddink as coach was a masterstroke but now he is off to Russia. Time to sign up another big name, but please, not Sven.

I also guess we have seen the last of Mark Viduka who given his age must surely retire from international football.

No ticker-tape parade for the socceroos but still I reckon they did us proud. I've been watching World Cups for quite a long time now but for me this was truely the most exciting.

Now that Australia are in the Asian Confederation we should be seeing more of the socceroos at World Cups in the future. There is also talk of Australia bidding to host the World Cup. Given how we ran the Olympics I reckon we would have a good chance.

Now... onto the start of the Turkish Super League.

PHOTOCAPTION: Not me but it pretty much sums up how I felt yesterday. (nicked from SMH)
By Oz Kanka - June 27, 2006