A not so friendly friendly 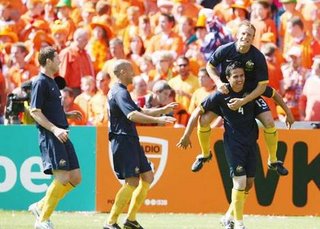 Holland played Australia (1-1) yesterday and a "friendly" it was not.

Plenty of rough hacks from behind, many looking very cynical, and an eventual red card for Luke Wilkshire has probably made sure that Australia will not be the team that Dutch supporters will take to heart when the World Cup starts later in the week.

The match was broadcast live in Turkey (no doubt the programme organisers at Kanal 8 have seen the blog and noticed the huge interest that Turks have in the Australian campaign) and I managed to see a fair bit of it.

1) The Dutch are bloody good. They gave us absolutely no time on the ball in the midfield and always looked dangerous.

2) The Australians like playing it rough if need be and my guess is that this is exactly how they will play against Brazil.

3) Australian goalkeeper Mark Schwarzer has cemented his place in the first squad after pulling off some great saves.

Van Nistelrooy opened the scoring after nine minutes and for most of the first half it looked like the Dutch might run away with it. Luckily the ref missed a pretty clear hand ball by Vince Grella much to the dismay of the sea of orange in the stands.

The referee proved again just how out of step he is with his international counterparts when he awarded Australia a penalty when someone brought Mark Viduka down in the box. Hasn't the man seen the FIFA instructions (instructions that the ref in the UEFA Cup final and the man who officiated in the Australia - Greece friendly last week certainly took to heart) that Viduka is never to be given the benefit of the doubt in these situations.

Viduka stepped up to take the penalty and, yet again, managed to miss. This time the ball hit the crossbar, bounced down, hit the keeper, then hit the side crossbar, then a Dutch player tried to clear but only managed to whack into his own keeper and then, finally, Tim Cahill hit it into the back of the net.

Not long later Wilkshire was sent off but the Australians managed to keep the Dutch out.

All up not a bad result.

PHOTOCAPTION: The Aussies celebrate after Tim Cahill equalised. Phot nicked from the SMH.