Perhaps we should stick to writing, and not playing 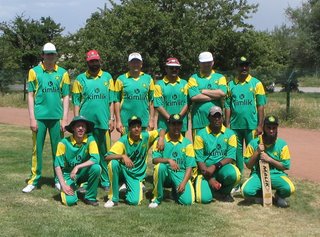 This blog normally sticks to reporting about sport, football in Ankara in particular, but today yours truely actually went out and played some. Cricket in Ankara. Thought it never existed? Well it does thanks to the great work of a group of expat Pakistanis.

The pitch was a just a little uneven but the organisation was excellent. We all had all the kit, two umpires of course (who had walkie talkies to inform the scorers!) and we even had a proper medic, well, a guy with medic-type bag.

As for my game, lets just say that Isaac Promise is a damn sight better at football than I am at cricket. Unfortunately the Ankara Stars lost by (I think) six wickets to the Deri of Istanbul. I was told deri means village in Urdu.

It was a fun day though, although I have a feeling the bruise on my backside is going to be bloody sore in the morning.

Photocaption: The Ankara Stars line up before play.

EDIT early Monday morning: The second match was played on Sunday and despite weary limbs and one hell of a bruise your correspondent managed to score 15 runs. Not great, but not bad either. Unfortunately the Ankara Stars went down by about 30 runs to METU.
By Oz Kanka - June 03, 2006