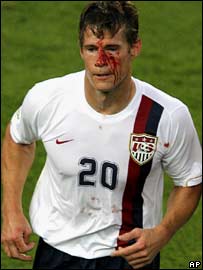 The Olympics in Sydney a few years ago saw the usual swarm of Yankee journalists descend on the city to write home about how their boys and girls won everything. These journos liked what they saw in this strange land because, for many of them, it wasn't so strange at all.

Australia is a big country, so is the USA. Aussies dress in the same sloppy manner as Americans and we both have a penchant for being extremely cocky when winning. The only real difference they could find was that crime rates were much lower in Australia and that we drive on the proper side of the road, a fact that one unfortunate Yankee journo found out the hard way.

It was thus with total surprise that these American journalists watched a USA-Cuba volleyball match. It may have been a different sport but this blog isn't big on fact checking. To sum up, the entire Aussie crowd were supporting the Cubans.

The American journalists were dumbfounded and wrote in their paper's back home how we were ungrateful so and sos and if it hadn't been for them we would all be speaking Japanese.

They had obviously never heard of the idea of supporting the underdog and so, for perhaps the first time in my life, I've actually been, as the Americans say, "rootin' for" the USA this tournament.

Now finally onto the match. I was impressed with the Yanks. They came out hard, had two guys sent off and despite this they ran for the full 90 minutes. If they had been just a tiny bit luckier they could have got away with what would have been the upset of the tournament so far.

Whereas the Italians were rolling around on the pitch as if they had been shot, the Americans took the hard hits the way you are supposed to. ie get right back up. In other words it was the Yanks who gave "soccer" the better name tonight, and not the playacting Italians (who all need a decent haircut by the way).

There was one exception to this with McBride being the only American to need sideline help, but I guess he can be excused considering he had just been elbowed in the head and the claret was flowing down his face nicely.

So well done to my Yankee cousins. A 1-1 draw with the Italians ain't so bad, and the way you achieved it showed true grit. Gee, you played as if you were Aussies tonight, and a greater compliment I cannot give.

No more writing from me until tomorrow night's post entitled "Upset of the Millenia". Let me dream a bit.