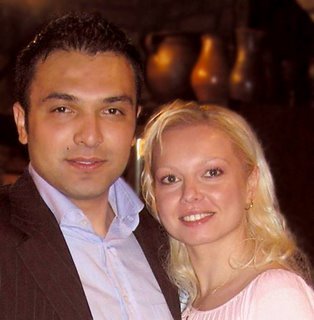 Our dear Zagreb Kanka has decided that it should not just be Sir Eski Kanka and Oz Kanka who should get their ugly mugs onto the blog with Genclerbiligi general manager Hasan Cetinkaya. And so, as a service to the world.... we present Zagreb Kanka and Hasan.

No football news today, well not much... I watched the England-Paraguay match at a packed British Embassy and had the piss taken out of me completely.

That was it. I accidently said "we" and the Poms gave me crap for the rest of the match.

While I thought "we" played well, Beckham had his first good game for years, I think England have some serious problems at the back. I didn't see the Sweden T&T match but did manage to watch Argentina-Costa Rica and quite frankly looking at all the matches so far I'd put money on Equador to win the cup.
By Oz Kanka - June 10, 2006